When the shoe disconnects from the cable

A magic boot named “MagicShoe”, developed by machinery manufacturer Trumpf Maschinen Austria, simplifies the operation of bending machines. That it is safe to use this innovation has been confirmed by a TÜV AUSTRIA certificate.

The cable was in the way, and it took a lot of time to position the mechanical footswitch at every workstation. These were the facts that led German machinery manufacturer Trumpf to come up with a solution for increasing the productivity of its manually operated bending machines. The result of the thinking and development process: as an alternative to the footswitch – which is still necessary for operation on account of the emergency stop button – the machines are now controlled using a high-tech work boot called MagicShoe.

The stroke is initiated by a simple movement of the foot. According to Trumpf Maschinen Austria, this saves time, guarantees a higher output and more freedom of movement during sheet metal bending. The ergonomic boot was developed at the Group’s competence centre for bending technology in Pasching, Upper Austria. The automation technology to go with it was provided by Sigmatek, and the technical safety inspection of the Industry 4.0 “tool” was carried out by TÜV AUSTRIA. The boot is made by SCHÜTZE-SCHUHE in Mühlviertel, Upper Austria.

When logging on to the machine, the respective force thresholds of the triggering pattern are adjusted to the individual operator. Unintentional triggering, such as by tripping, is not possible because the sensors can distinguish between different types of movement, according to Trumpf. An ultrasonic positioning system makes sure that a stroke is only triggered in the work area.

Medical technology students from the University of Applied Sciences Upper Austria contributed to the development of the triggering algorithm. An evaluation algorithm created in collaboration with the Linz Center of Mechatronics (LCM) calculates the exact position of the operator accurately. The machine will stop as soon as the operator leaves the defined work area. 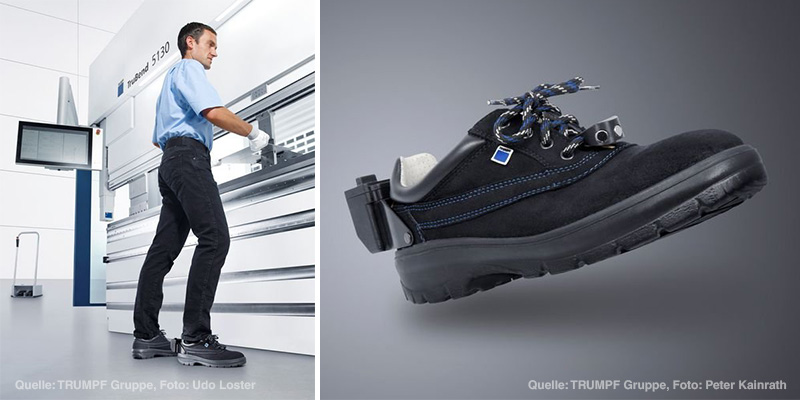