The collaboration between NATURKRAFT and TÜV AUSTRIA guarantees consumers, companies, cities, and municipalities a resource-friendly and sustainable supply of green electricity from Austria.

NATURKRAFT has set itself the goal of supplying customers with electricity exclusively from renewable energy sources (water, wind, biomass, geothermal, sun etc.). The source of electrical energy as well as the associated environmental impact is tested on an annual basis by TÜV AUSTRIA and confirmed by a certificate. In order that consumers, companies, cities, and municipalities can be safe in the knowledge that the green electricity that they purchase is produced in a resource-friendly and sustainable manner in Austria, TÜV AUSTRIA checks the sources of NATURKRAFT. If it has been determined that the electricity comes from guaranteed renewable sources, NATURKRAFT receives a corresponding confirmation from TÜV AUSTRIA.

NATURKRAFT- director Leopold Wanzenböck: "With our NATURKRAFT products and  services, we are accelerating the generation of electrical energy from renewable energy sources. The use of Austrian hydropower plays an essential role here. With the switch to green electricity, customers from NATURKRAFT can make a valuable contribution to environmental protection and to the use of natural resources. The confirmation by TÜV AUSTRIA is an indispensable prerequisite for NATURKRAFT, so that individual NATURKRAFT products were distinguished by the Austrian Federal Ministry of Agriculture, Forestry, Environment and Water Management with the Austrian eco-label."

Stefan Hass, CEO of the TÜV AUSTRIA Group: "In order that electricity can be identified according to its origin, the legislator has obliged all end customer suppliers to develop a fully documented detection system for energy sources. NATURKRAFT provides additional transparency beyond the prescribed detection system: we check on behalf of NATURKRAFT, whether there is sufficient proof of origin for green electricity with respect to the quantity of power which is sold. The test by TÜV AUSTRIA thus gives the end customer the definitive security that only sustainable and environmentally-friendly electricity has been removed from the 'sea of energy'."

From 01/01/2017, all TÜV AUSTRIA Group locations in Austria will be provided with an annual electricity demand totaling 1,600,000 k Wh, with green electricity from Austria by NATURKRAFT.

NATURKRAFT Energievertriebsgesellschaft m.b.H. was founded in Vienna in 2001 and supplies private, business, and major customers as well as cities and municipalities with electricity exclusively from renewable energy sources. The subsidiary of EAA-EnergieAllianz Austria, in which Energie Burgenland AG has a ten percent share and EVN AG and Wien Energie GmbH have a respective 45 percent share, ranks as the most energy-friendly electricity supplier in Austria. The latest annual turnover was 85.5 million euros. At the most recent power supplier test by the independent research institute ÖGVS, NATURKRAFT - as in the previous year - was once again selected among the top electricity suppliers in Austria. 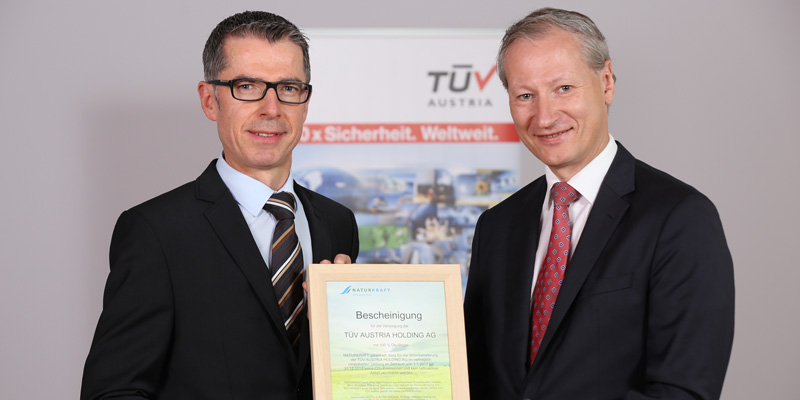 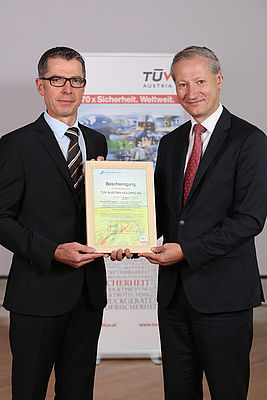