The checking of containers, tanks and pipelines clearly has a very central position in safety inspections of industrial plants, refineries and power plants. And no wonder, considering that the material has to withstand a great deal: varying pressures, massive temperature fluctuations, a wide variety of liquid consistencies and quite a lot more.

This is where the extensive expertise of TÜV AUSTRIA’s technicians comes into play, which they once again demonstrated in the general inspection (“Turnaround”) required by law for the petrochemical part of the Schwechat refinery.

As any major interruptions in the production processes are to be avoided, narrow time horizons are set for the complete testing of refineries, showing the speed at which this concentrated knowledge and meticulous, practical implementation have to be called up. At the OMV refinery in Schwechat, for instance, TÜV AUSTRIA managed to complete the petrochemical testing process from mid-April to mid-June. This is done using the “two-heads-are-betterthan-one principle”, whereby OMV and TÜV-AUSTRIA inspectors work closely together.

Legal requirements
Pressure vessels , tanks, pipelines, etc. of refineries are subject to a statutory inspection regime. The goal is clear: operations are to run safely on a permanent basis. This is supposed to be ensured through independent inspections by a third body, such as TÜV AUSTRIA.

This entire legally prescribed general inspection of the plant concentrated an enormous number of specialists along with their expertise. According to OMV, during the entire turnaround an additional 3,500 individuals from various partner companies were employed at the plant (200 of which were doing testing, inspecting, servicing and repairs). The information provided makes for about 820,000 working hours by all the partner companies combined. Incidentally, the fuel production (to put it simply) section was just subjected to a general inspection in 2016.

TÜV AUSTRIA consolidated an impressive number of qualified personnel for the overall inspection of the petrochemical facility in Schwechat, according to Reinhard Preiss, Business Area Manager Industry & Energy International at the refinery. So, colleagues with refinery experience were even brought to Lower Austria from Western Austria and Germany. In total, over 30 highly specialized experts were involved in non-destructive tests and inspections, added Gerhard Höltmann, Business Area Manager Industry & Energy Austria.

The two experts point to the diversity of the testing and inspection processes: “In principle, it is necessary to distinguish between tests that are carried out throughout the year during operation, and ones that are handled quickly on a large scale in a concentrated manner in the context of prescribed stops or turnarounds.” That also explains why the scheduling of such turnarounds is set extremely tightly and there is a need for such a large deployment of personnel.

“It takes good planning in the run-up so that the processes can be timed with precision,” Preiss explains. After all, vital economic interests lie behind industrial plants of such magnitude. OMV relies on the legally required Risk Based Inspections (RBI, see box on page 15) for its projects. According to Höltmann, this is to prevent “over-inspections”. RBI also saves a lot in the way of documentation work because data already known can be drawn on, reducing the time it takes to update it, Höltmann explains. This reduces the amount of time previously required so that the main attention during the turnaround can be concentrated on the areas of the plant with the highest risks.

International inspection work
TÜV AUSTRIA is also regularly hired to inspect refineries internationally. TÜV AUSTRIA Romania, for example, consistently receives orders from Romanian plant operators for varying degrees of non-destructive testing and inspection. “There are probably some unique characteristics among the various refineries, but the basics are virtually identical,” says Preiss on the differences in the various plants.

TÜV AUSTRIA inspectors’ know-how is also appreciated beyond Europe. “Currently, a team from TÜV AUSTRIA Romania has been deployed to a refinery in Israel. We were awarded the contract for part of the special tests,” Preiss explains.

Background in becoming an accredited inspector
Preiss and Höltmann further explain that NDT procedures are tools that provide data to assist during inspections (which are the tasks that carry more responsibility in comparison with testing) in assessing whether and to what extent repairs of tanks, pipes, pressure vessels, etc. are necessary. TÜV AUSTRIA was chiefly involved with accredited inspectors in Schwechat, for example.

Before accredited inspectors are deployed unassisted on projects like the Schwechat refinery, they have to go through a defined training program so that they can ultimately perform their tasks within TÜV AUSTRA’s quality management system.

The training and courses necessary are offered by external expert organizations (e.g., training to become an International Welding Engineer) and in part by TÜV AUSTRIA Academy itself. A very important point in the process is experience. For this reason, trainee inspectors accompany experienced colleagues over a period of time in order to gather appropriate practice. Then an examination has to be passed for final certification.

A short definition of RBI Risk-based inspection (RBI) is used to optimize maintenance processes used in inspections of equipment such as pressure vessels, heat exchangers, and pipelines at industrial plants, such as refineries. RBI examines and assesses the safety and business risk of “active” and “potential” damage mechanisms to assess the probability of failure and consequences. It is thus used to identify and prioritize risks relating to equipment breakdowns. Effective inspection methods and frequencies are supposed to ensue so as to minimize risk and to evaluate defined inspection programs. Ultimately, only the absolutely necessary tests are supposed to be carried out while the plant is stopped. 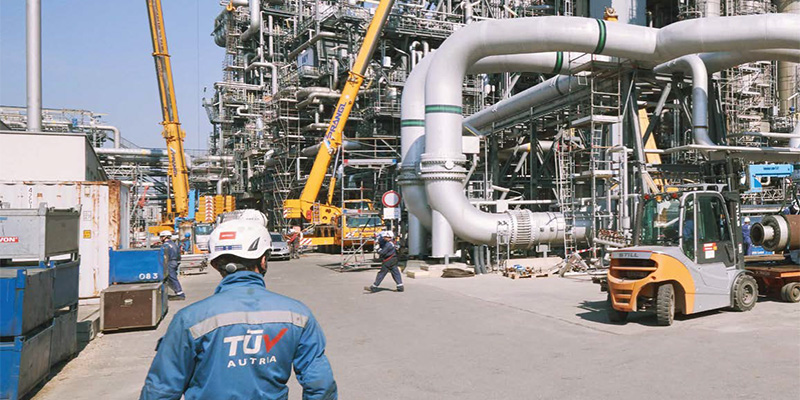