Millions of people used a lift on 20 April, just like any other day. The general population didn’t take much notice of the new Lift Directive – the world kept turning, the lifts still moved. “As of today, lifts must be placed on the market in accordance with the new law”, Thomas Maldet, Division Manager at TÜV AUSTRIA stated. “But it is only from August 2017 at the latest that every newly installed lift must comply with ÖNORM EN 81-20 without fail.” Still, manufacturers are advised to take the necessary steps and bear the new standard in mind even now so as to save costs later.

Stephan Störmer from TÜV AUSTRIA also recommended to plan ahead and build lifts in compliance with the new standard even now. In his talk he discussed the changes in connection with the new Lift Safety Regulation 2015. National implementation of the European Lift Directive not only expands the circle of actors from industry but also involves notified bodies to a greater extent, e.g. regarding the retrofitting of lifts bearing CE markings.

From the lux value of the lighting to the requirements made on the roof of the lift car through to the working load limit of the lift pit floor – Erich Hable from ThyssenKrupp Aufzüge GmbH explained about the implications of ÖNORM EN 81-20 for lift manufacturers. At the same time he remarked that there would always be a gap between codes of practice and the state of the art – naturally, technological advancements are always a few steps ahead.

The gateway to safety

The speakers at the TÜV AUSTRIA Lift Day event discussed the new Lift Directive in detail, covering every aspect: Frank Schmidt from Aufzugswerke Schmitt+Sohn GmbH & Co KG, for example, mentioned the greater demands made on the mechanical resistance of lift doors, which further enhances the protection against falling down the lift shaft.

Emergency call systems in lifts were the subject of Margarete Landertshammer’s talk from alcomtec aufzug- & gebäudekommunikationstechnik gmbh, who argued that the use of analogue terminals in digital networks poses a security risk. According to her, transmissions of personal emergency calls and malfunction alerts are either transmitted faultily or cannot be transmitted at all. Wiener Linien, Vienna’s public transport operator, concurred with this view. As a result of a malfunction in the emergency call system, they took 120 lifts out of operation. A wise decision, according to the experts present at the Lift Day event.

Among them was Manfred Spiller from MS Mikroprozessor-Systeme AG, who talked about the opportunities and the potential of new telecommunications networks with IP-based structures in contrast to the unreliability of analogue solutions. Multifunctional lift surveillance systems with floor announcements and emergency call filtering in particular were considered superior by Mr Spiller.

Floor announcements as an integral aspect of accessibility were also featured in Andreas Kloiber’s talk (TÜV AUSTRIA), given that obligatory accessibility is now an established fact in the construction sector. The reachability of lifts must be considered in the designs, as do acoustic signals for orientation. A qualifying “but” with regard to accessibility was mentioned by Gottfried Leitner (Omnia hoch p GmbH): if accessibility poses an impediment to cultural heritage management, decisions are usually made in favour of the latter.

Lifts for the emergency services

Which requirements must be met by lifts used by the fire brigade? In his talk about ÖNORM EN 81-72:2015 in connection with the Technical Guideline for Preventive Fire Protection (TRVB) 150 A, Martin Salomon from TÜV AUSTRIA informed the audience about the technical demands made on lifts for the fire brigade. These are varied: ranging from the equipment in the lift car to the drainage of fire extinguishing water through to identification by means of pictograms, there are many aspects to be considered.

Another important date: on 1 May 2016 the new Styrian Lifting Plant Act came into force. Harmonised with European legislation, it will simplify approval procedures. The associated changes were discussed by Dr. Bernhard Schaffernak from the Styrian State Government Office in the final talk.

To sum up the 15th TÜV AUSTRIA Lift Day: things are looking good for lift safety in Austria owing to the strict legislation, the operations of maintenance and repair firms, and excellently trained lift inspectors. The independence and diligence of inspectors should continue to be a top priority to ensure that it stays this way.

We would like to extend our thanks to the speakers for their fascinating talks, to all the guests for the interesting conversations and to the City of Vienna – Business Group for Housing, Housing Construction and Urban Renewal for the great collaboration, as always. We look forward to seeing you again next year! 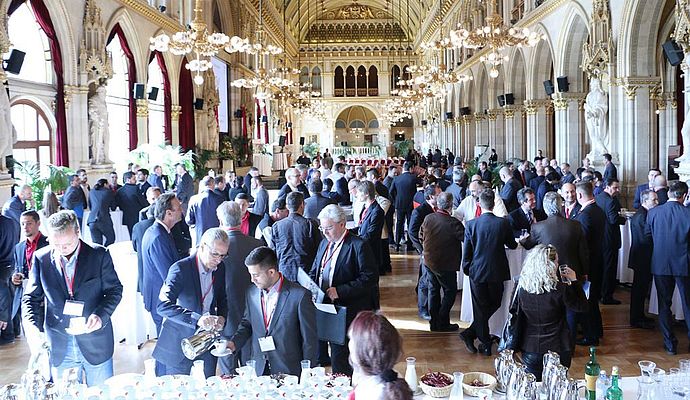